Tostan Facilitator Nafissatou Sabaly sparked discussion both within her family, her native village, and throughout the social network linking the village of Néma Dianfo to neighboring communities in Senegal. These discussions catalyzed a major shift in community-wide opinion of the practices of female genital cutting (FGC) and child/forced marriage. 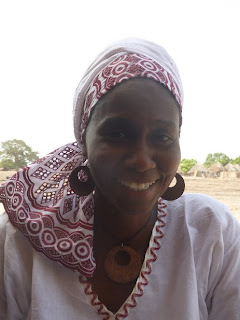 How does your family feel about your work?

I grew up in Yirkoye [a village in Senegal]. Since I started at Tostan, I’ve talked with my mother, my grandmother, my sisters and my brother about FGC. My mother told us that we had to [practice FGC]; that it was our custom. But when I told her, “No, it’s something that can kill,” she really started to think about it. We didn’t know the risks when I was a child. But now my brother’s daughters have never been cut—when he started having children, I took the time to talk with him about it.

Did all of your family agree with his decision?

My father didn’t have a problem with ending the practice. He pushed my mother to give it up. He understood the dangers right away when I explained them. But my mother kept asking if her granddaughters would be able to find a husband if they weren’t cut.

How did other community members respond to your views on FGC?

It was difficult to convince my home village. But every time I went back to visit, I talked with the women in my family, and especially with my brother’s wives. And they came and stayed and listened.

How did you convince them?

There’s one woman in my village who has never been able to have a child because she was cut. I explained why she couldn’t carry a child, and that really scared the women. And one of my brother’s wives had been cut when she was younger. They married when she was 14 years old and she had to have a cesarean. She was sick in the hospital for an entire month.

How did you feel about your brother marrying someone so young?

I objected. The girl didn’t know she had a choice. Her parents chose for her. After she ended up in the hospital and my brother saw what had gone wrong, he said he would never let his own daughters marry so young.

How did the rest of your family react?

Everybody saw what had gone wrong. My younger sister is 22 years old now, and my parents haven’t made her marry.

Do you think your family will continue to support her decision?

I was married when I was 17 years old, in 1990. I divorced in 1999. [My husband] wasn’t terribly cruel, but we weren’t getting along and there was occasional violence. My father thought I just didn’t want to be married. He said, “Sometimes there’s just violence in a marriage. It’s like that.” I told him: “You took me out of school to get married, now I’m moving back home and I’m going to start school again.” And I did—I found an organization, [Tostan], where I learned to read and write in Pulaar.

In this interview with Will Schomburg, Tostan Communications Assistant in Dakar, Nafissatou describes her personal journey.