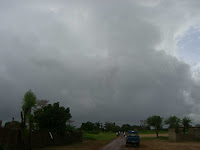 It rained all night. A hard rain like one only finds in deserts, rain that seems as if the clouds are falling to earth whole. It is windy, too, and the sound the wind makes it seem identical to that of the cold, dry winds that always came plunging across the plains of my childhood home in Nebraska. Yet the lightning, then thunder (after 6 seconds, for those of us who lie awake, counting), and the moist, stuffy air leave little room for winter fantasies. The deluge stops near dawn, and as I get up, I can hear the trickle of lingering water pattering down from the roof onto the earth outside the window, as the birds venture out to tell the world their opinions of the storm. 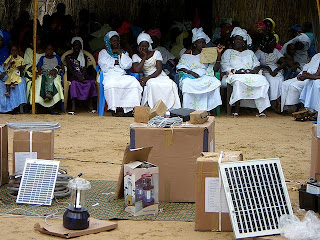 My first thought: All this rain is not a good sign for a sun-related project. Today, Tostan and one of our rural community partners, Keur Simbara, have planned to celebrate the launch of the Solar Power! Project. As we drive, it begins to sprinkle again and as we approach, we start to wonder if the event will even be held at all. Several partners and government officials are coming from Dakar, and the roads can flood at any time. Indeed, they may have already flooded.

As we approach the rain softens, then stops as our Tostan delegation composed of myself, Tostan’s ED Molly Melching, Board Chair Gail Kaneb, Senegal Director Khalidou Sy, our African Communications Manager Malick Gueye, and others, pulls into the village. We roll in behind the representatives from the Government of Senegal, who have been a vital part of this project.

I know this village well, having been here at least three times before. Keur Simbara is quite famous; it was one of the first communities to abandon female genital cutting (FGC), back in 1998. Indeed, Keur Simbara’s Village Chief and Imam Demba Diawara came to Molly Melching with the critical insight that to end this practice, communities must engage their extended social networks. As we get out of the car and join the procession entering the village, it is clear that today has nothing to do with FGC. No, today is about power: power in the form of solar-generated electricity that will be coming to 7 villages, and the powerful women who are making it happen. 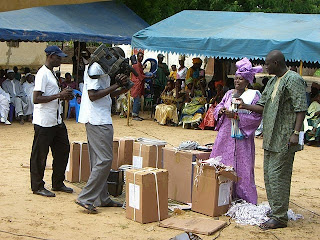 After we have taken our seats, Dame Gueye of Tostan Senegal steps up as emcee, welcoming everyone and giving background information about the project. Everything that has transpired to bring these solar units to Keur Simbara seems far-fetched when laid out so plainly. Doussou Konate, a local woman leader who participated in Tostan’s Community Empowerment Program, traveled to Tilonia, India in 2009, staying for six months, along with six other African women. Doussou trained at the Barefoot College where she became a solar engineer. The Barefoot system works only with mothers and grandmothers, and uses an all-picture-based training system to overcome language barriers. In other words, Doussou was trained to become a solar engineer without being able to speak to her teachers. After her training was complete, Doussou packed up the materials she would later use to install solar panels on fifty households in Keur Simbara and surrounding communities, and returned home. This event–moreover, these women’s accomplishment– is even more remarkable in a place where women aren’t normally allowed to travel to neighboring villages, let alone India.

As I digest the story, Dame continues with the agenda, vacillating between French and Wolof spoken in this village, even though Keur Simbara is a Bambara village. Dame first asks the local Imam to say a prayer to bless the ceremony. Then Demba speaks, and holds forth as only a truly wise person can, bringing nods, smiles and tears at various points. And then, as Demba speaks, it happens: the sun comes out. It happens subtly, first with a brightening sky and then with shadows emerging around us, edges made by the tents over our heads. I look around to see if anyone else has noticed, but their eyes are now on Doussou, who is presenting to the crowd, surrounded by the materials she will use to bring light. 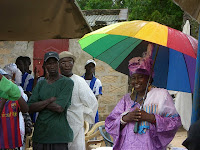 Doussou simply cannot contain any ounce of the joy this day represents for her, and for her community. I have met her before several times, but today she is exuberant, dressed in a beautiful purple boubou. It is beyond wonderful to see her remove each piece of the solar panel from the boxes she herself packed, hold them up, and describe what they do. A cameraman with RTS, the Senegalese national television, holds the camera over the box as she reaches in, plucking item after item from amid the shredded paper.

After Doussou’s presentation, as though on cue, it begins to sprinkle, then pour. After getting the boxes to a safe place, the event goes on; we hear from Madame Ndeye Khady Diop, Minister of the Family, as well as other honored guests. The Tostan class even sings songs about human rights–always a touching moment. I also got a chance to speak with Tostan project supervisor Ousmane Niang, who told me great stories about the eight villages he is working with right now–their Community Management Committees have begun to run markets each week and are putting the proceeds into a community fund that helps people in medical emergencies and gives loans to entrepreneurs.

After the speeches end, it stops raining long enough to allow for us to head over to the health center, where Doussou has already installed one of the panels. Even with the midday sun now peeking through the clouds again, the health center’s rooms are quite dark. Doussou flips the switch and I’m stunned by just how bright the light is. Plus, she shows us where cell phones can be charged, and that another lantern is powered as well, all by one panel. 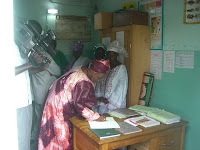 As the minister signs the guestbook in the health center under the light Doussou has installed, and as the local media interview Molly and Doussou, it is easy to see that something much greater than solar power has come into this community. It dances in Doussou’s voice when she says Namaste–a traditional greeting in India– in a West African accent, smiling broadly; it stands in the posture the village leaders take as the event unfolds; it twinkles in the eyes of a woman who asks me to take a photo of her next to the lamp that now lights the health center. This community is proud–filled with a pride that can only come from doing things on one’s own.

As the event winds down, we pay our respects and say  goodbye. We drive out, waving to the villagers slowly walking back to their huts and houses. I flip through my photos of the day as we tumble along in our SUV, through the mud and little brown ponds of water that make up the road. We talk about Doussou, about this project, and about the fact that 350 households will get such panels, installed by Doussou and six other women.

We turn onto the main road, and I can’t help but remark at the landscape around me, which last January was brown and dusty, but has now transformed itself so entirely that I cannot recognize it. It stuns me to think how total, yet simple, transformations can be. Out the car window, and on my camera’s tiny screen, the whole world seems poised to change for the better, to grow, transform, and flourish in the sunlight.

Gannon Gillespie of Tostan’s office in Washington, D.C. shares the story of his trip to the Senegalese village of Keur Simbara where the community celebrated the arrival of solar generated electricity. Photos by Gannon Gillespie. To see more photos from the event, clickhere.