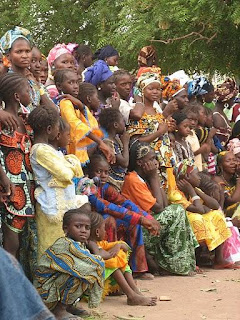 In March, staff from the Tostan International Headquarters in Dakar, Senegal, visited The Gambia to meet with colleagues working to bring the Community Empowerment Program (CEP) to Gambian communities.

Tostan has been active in The Gambia since 2006, working in 80 Fula and Mandinka communities in the Upper River Region. The Gambia is the smallest country in continental Africa and has a 78% prevalence rate of female genital cutting (FGC), according to a UNICEF survey. Since Tostan began implementing its program in the country three years ago, three public declarations have taken place in The Gambia and 48 communities have come together to proudly announce their collective abandonment of FGC and child/forced marriages.

During their trip to The Gambia, Tostan staff met with many local NGOs and organized meetings to spread knowledge of Tostan’s program, which brings education based on human rights to thousands of rural community members. Over the years, Tostan Gambia has built a successful relationship with the Gambian government and was recently recognized by President Jammeh for having the best approach in regards to community empowerment leading to FGC abandonment.

A national newspaper, the Daily Observer, met with the Tostan delegation and reported on the successes of the Tostan program in the country. While interviewed by the newspaper, Muhammeh Alkabir Bass, the Tostan Africa Director, expressed his gratitude to President Jammeh and the Gambian government for their continued support of Tostan.