Spotlight on Girls: Hamda and the Young Human Rights Defenders of Somaliland

Through our work we have learned that as communities become empowered through human rights-based education, their ability to empower girls amplifies. In celebration of the first ever International Day of the Girl—11 October 2012—we are sharing the inspiring stories of five girls as they pursue their goals and build an empowered future for themselves and their communities in our blog series, Spotlight on Girls.

Now let’s turn the spotlight on Hamda and the girls from the Maroodi Jeex region of Somaliland. 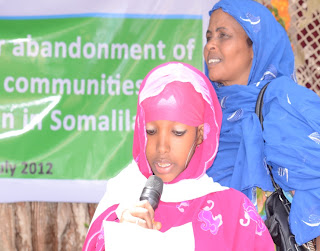 On July 7, 2012, a young girl named Hamda announced the decision made by 28 communities in the Maroodi Jeex region of Somaliland, to abandon all forms of female genital cutting (FGC) and child/forced marriage. Hamda’s community helped reach the decision to declare abandonment through participation in Tostan’s human rights-based education program, the Community Empowerment Program (CEP).

Throughout the process that led to that memorable day, the attention of the Tostan team in Somalia was caught by the dynamism and spirit of participation by the girls participating in the CEP.

Even though Hamda is young, she had the courage to stand up for her human rights and realized the importance of her education. Along with other girls her age, Hamda participates in the CEP class sessions centered on human rights. The class sessions help girls to understand the responsibility their parents have to protect their rights, for example the right to be free from all forms of violence. At the same time, they learn they have the duty to participate in the development of their families and community.

Through the Tostan class sessions, Hamda and other girls her age have learned how to encourage positive social change in their families and communities, and play a big role in community activities such as regular clean-ups and awareness-raising events about FGC, child/forced marriage, violence against women, health, and protecting the environment.

The girls also spread awareness about what they learn through a drama group that performs local songs and poems to advocate for positive social change. While girls take on the lead roles in the drama group, boys also participate to raise awareness about human rights.

Hamda, along with the 28 declaring communities, pledged to engage hundreds of villages in the ongoing movement for positive social transformation in Somaliland. Together they are fulfilling their responsibilities as human rights defenders.

Story by Birima Fall, National Coordinator of Tostan Somalia
—–
Show your support for girls by sharing Hamda’s story with your friends and family! Looking for more? Read other Spotlight on Girls posts here.