Guinea-Bissau has one of the poorest electrical power infrastructures in the world. Even in the capital city, Bissau, where state electricity is available, residents regularly experience 10-hour power outages. Five local women from the remote Oio, Bafata and Gabù regions, however, take the matter into their own hands and light up their communities with solar power. 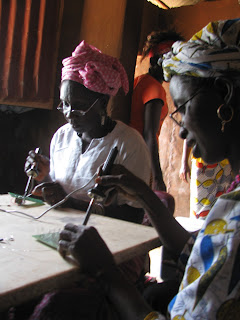 As part of Tostan’s Solar Power! Project, these courageous women attended a six-month training program to become solar engineers at Barefoot College in India. Upon returning home, these newly-trained women were eager to harness their new knowledge and skills but encountered a linguistic complication—they had learned the terms for parts and tools in Hindi and English but not their local languages. Consequently, finding replacement materials at home was a challenge.

Tostan Regional Volunteer Matthew Boslego developed an innovative solution. Matt created a solar panel catalog to provide the solar engineers with “total linguistic access” to everything that they needed. Matt collaborated with local supervisors and Tostan facilitators to build a catalog identifying key items in a variety of local languages. In this interview with Dakar Communications Assistant, Alisa Hamilton, Matt explains his process.

Alisa: How did you get the idea to make a catalog?

Matt: One time I was visiting a village where the panels are installed and I met with one of the solar engineers. One of her screwdrivers had broken. It was a really simple part, a Phillips head screwdriver. The ones they had been buying locally were of a much inferior quality to the ones they had originally been given by Barefoot College. Finding any kind of tools in the rural communities is really difficult because there is close to zero availability for such things. So I had the idea to make a catalog to give them a way to have access to high quality tools, which can be found in the capital but not in the rural regions.

Matt: There are two different copies of the catalog. One of them is written in Portuguese, Creole and Fula. The second one is in Portuguese, Creole and Mandinka in order to give them total linguistic access. The first section explains step-by-step how to use the catalog. If you need a piece, find it in the catalog, call Tostan, send the money for the item to Bissau and a Tostan team member will find the piece for you. They have to pay for it, but Tostan will find it for them. Then someone will bring it out to them during a trip to their communities. 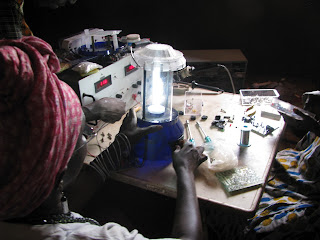 The second part of the catalog has pictures and names of pieces as well as information as to where they can be found. I wanted the engineers to be able to find the pieces themselves just in case, for example, Tostan leaves. I took a picture of every single piece they were given in India  had as well as some other pieces that I thought might be useful—basic things like screwdrivers and wrenches as well as more specific things like soldering irons, additional solar panels, solar batteries, charge regulators, wires. I included anything that they might need that can be found in Bissau.

Next to the picture, I put the name of the piece that they know, which is in English/Hindi, as well as the name in the local language, either in Creole, Portuguese, Fula or Mandinka. I also put the price, location and contact information of the store where the piece can be found.

Alisa: Did anyone help you make the catalog?

Matt: I had a lot of help translating. Tostan supervisors helped me with the Portuguese and Creole, and facilitators, who are the experts in the local languages, helped with the Mandinka and Fula.

The catalog will be distributed to all five solar engineers this spring during in-country trainings. The five women will teach apprentices so that the Solar Power! Project can continue to light up remote regions in Guinea-Bissau for many years to come.