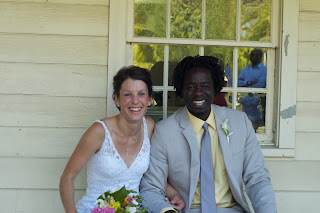 Krista and Serge Badiane, newlyweds living in Michigan and enthusiastic Tostan supporters, have been celebrating their marriage for over a year. The couple eloped in May 2010 hoping to avoid a big ceremony and gifts. “That didn’t really work out for us,” said Krista. “We both have large families and everyone wanted to celebrate with us.” Instead, their marriage celebration has taken them from Michigan to Senegal and back.

Serge, a native of Dakar, and Krista, of Michigan, met in a graduate class about sustainable development in Senegal at the University of Michigan’s School of Public Policy. Coincidentally, Krista had also studied abroad in Senegal in 2001, the same year that Serge came to the U.S. as an undergraduate student at Hope College in Holland, Michigan. It was through this class at the U of M, which included a ten-day visit to Dakar, that they first learned about Tostan’s work and were impressed by the program and model. 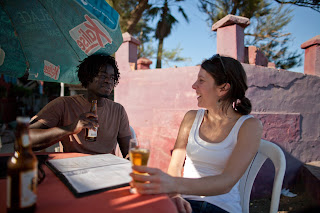 As part of their wedding celebration in Senegal, Serge’s family and friends planned a Yendoo, a day-long traditional celebration with food, drumming and dancing, for New Year’s Day 2011 and a reception at a local hotel, Hotel Océan, the following day.

For their Ann Arbor ceremony, which took place in late August, they asked their guests to donate to Tostan in lieu of giving gifts.

“We wanted to do something that would have an impact and something that was connected to Serge and his side of the family,” Krista said. “Our guests were really positive and supportive. It was great to give a gift that will keep on giving and that others can pass along in some way.”