Guinea: Education at the Heart of Development 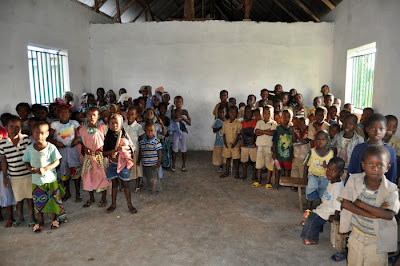 In western Guinea, the community of Simbaya, and specifically its Community Management Committee (CMC), is inspiring other communities as a leader of ambitious development.

In 2009, the village was integrated as a neighborhood of the urban commune of Dubréka and also began Tostan’s Community Empowerment Program (CEP). Since its participation in the CEP, a number of development projects have been carried out in the community including bridge repairs and the electrification of the village.

At the center of Simbaya’s changes, though, was the construction of the Community Mentoring Center – a place for learning at the heart of their community.

When the CEP first began in 2009, the messages shared about the importance of education resonated with the adult CEP participants. Suddenly, there was an influx of children attending the CEP classes, compelling the CMC to come up with a solution for the children of Simbaya who were eager to learn.

The closest school is located on the other side of a highway considered one of the most dangerous roads in Guinea because of the many trucks traveling at high speeds towards the cement manufacturers of Conakry. In addition to the difficult route, the school is often unable to accommodate younger children because it already lacks space for the older students. As a result, school only lasts half a day in order to fit in two classes per grade level.

The CMC came up with a creative solution, choosing to build their own Community Mentoring Center to provide each child of Simbaya with the opportunity to attend classes. 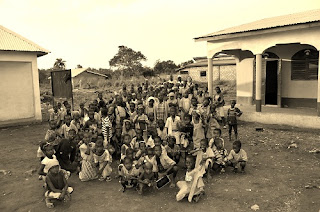 What began as two rooms in the home of a village elder soon grew to be a learning center accessible to all the children in Simbaya. This development was made possible by the ambitious plans of the CMC and Tostan facilitator who were able to secure funding for the new six-room center as well as a mosque and a drill with a water pump.  Currently, the CMC has drafted a plan for their next project: a community health center.

Thanks to awareness-raising activities led by the CMC, 180 children currently go to the Community Mentoring Center, the majority of them being girls.  Children ages four through 12 are divided into three classes according to their level and split time learning between Arabic and French courses.

Although the Community Mentoring Center operates quite smoothly, it is still working to overcome specific challenges, including limited funds for school resources and teacher training. Regardless, the CMC and community are committed to improving the Community Mentoring Center, a place that in just three years has transformed the lives of 180 children who are learning valuable lessons inside and out of the classroom.

This story was translated from French.