From The Gambia to NYC: Tostan Youth Activist Abdoulie Sidibeh to Speak at Women of the World Summit This Week 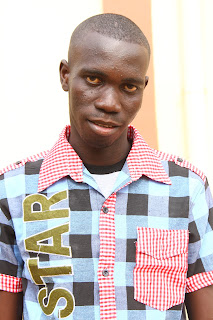 From March 8-10, inspiring leaders and activists will be in New York City to share their visions for social justice, human rights, and gender equality at Newsweek and the Daily Beast’s 3rd Annual Women in the World Summit. Representing Tostan this year at the summit will be Tostan Founder and Executive Director Molly Melching, Director of Strategic Development Gannon Gillespie, Senegalese Community Activists Imam Demba Diawara and Cheikh Diop, and Gambian Youth Activist Abdoulie Sidibeh.

Twenty-year-old Abdoulie Sidibeh is from the community of Bassending in the Upper River Region of The Gambia and was first brought to the attention of Women in the World organizers for his work in the 3rd Annual Gambian Youth Caravan. In October of 2011, Abdoulie and over 120 youth participants in Tostan’s Community Empowerment Program (CEP) staged a 5-day campaign for human rights and social change. Through group discussions, skits, and song, they traveled from community to community to raise awareness on the most pressing issues facing Gambian youth and their communities today, including drug use, child marriage, and teenage pregnancy.

Lilli Loveday, Tostan’s Regional Volunteer in The Gambia, recently sat down with Abdoulie to discuss his strong commitment to learning and sharing, his involvement with Tostan and the Youth Caravan, his thoughts on his upcoming trip to the United States for the Women in the World Summit, and his hopes and goals for the future.

Abdoublie Sidibeh is eager to attend the Women in the World conference as a representative of Tostan Gambia and believes that the event will provide him with an invaluable opportunity to learn. This learning, Abdoublie says, will not only benefit him but also his community. ‘‘I am motivated about going,” he explained, “because many important things will be discussed and whatever important things I learn I will take back to Bassending.”

Indeed, learning is at the heart of Abdoulie’s commitment to the Tostan program. After finishing his formal, grade school education, Abdoulie’s mother, a Tostan CEP participant, encouraged him to attend Tostan’s CEP classes as well. Since then, Abdoulie committed himself to developing his own awareness on issues such as democracy, human rights, and health and is dedicated to sharing this knowledge with his peers. Abdoulie explained, ‘‘even in formal education we did not learn about the things that Tostan teaches us…I’ve learned about the negative aspects of drugs; I’ve learned about democracy, about things that will bring us together as a community and things that do not contribute to a good life. I share what I’ve learned. For example, when my friends are smoking, I sit with them and explain why it is bad.” 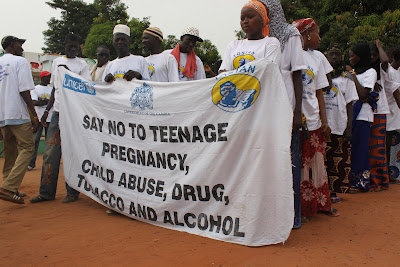 Abdoulie is a member of the Bassending Drama Troop, which performs plays to inform the wider community about issues discussed in Tostan classes. These plays provide a lively and enjoyable way to convey serious messages. During the most recent Youth Caravan this past October, Abdoulie played an important role in organizing the 5-day campaign. Abdoulie performed in a play about early pregnancy in which he acted the role of a young man who seduces a girl and impregnates her. He said, “it is important that people understand the health implications of such things so that they will think about their behavior more carefully beforehand.”

Abdoulie is passionate about sharing knowledge, which is why he has aspirations to become a teacher. “I would love to teach English or history…or to be a Tostan facilitator. I believe that if you are teaching, you are giving. In the same way that I’ve been taught, I want to share my small understanding with others.’’ Abdoulie is ambitious about his future and plans to study Information Technology upon his return to The Gambia, which he hopes will equip him with highly sought after skills that he can apply in his chosen career.

Abdoulie is excited about everything that Women in the World Summit has to offer. It is an incredible opportunity for him to be part of the event, and also for Tostan Gambia to be represented at an international forum. Abdoulie is confident that he will gain a lot from the experience, ‘‘I am very happy about going because I will fulfill my promise. I promised that I will learn and that’s exactly what I plan to do.’’