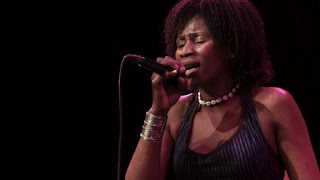 On Sunday, January 15 at 8 pm PT, LinkTV will be hosting the premiere the full length documentary Sarabah, a film by Maria Luisa Gambale and Gloria Bremer and produced by Steven Lawrence. This film depicts the bold efforts of Sister Fa, Senegalese-born hip-hop artist and human rights activist, to raise awareness about the harmful traditional practice of female genital cutting (FGC) throughout West Africa and diaspora communities. Awarded the A Matter of ACT Documentary Award at the Movies That Matter Film Festival in March 2011, the film has been given high praises by Ms. Magazine, UN and NGO officials, and youth activists internationally. Reaching diverse audiences, Sarabah strives to break the taboo of talking about FGC in public and to replace that taboo with open dialogue that encourages understanding and abandonment of the practice.

Making strides in the two worlds of hip-hop and human rights activism, Sister Fa inspires communities through her music to discuss the relevancy of FGC as practiced in their community. She states in the film, “We are not here to fight. We are here to educate.” Sharing Tostan’s belief in a respectful approach to discussing sensitive community-based issues, Sister Fa has partnered with Tostan to expand the reach of her music, inspiring change that is led by all members of a community—women and men, adults and youth.

The film will air first on Sunday, January 15 at 11 pm ET/8 pm PT and again on Friday, January 27 at 9 pm ET/6 pm PT on LinkTV (DIRECT TV Channel 375/DISH Network Channel 9410). Sarabah is a co-production of LinkTV and Yerosha Productions and is distributed by Women Make Movies.

To watch the full Sarabah film trailer and to hear Sister Fa’s music, please click the video below.

For more detailed information about Sister Fa’s other achievements and the film, please click the links below:

Winner of the 2011 Freedom to Create Prize