Afternoons in Samba Tacko, The Gambia

Situated under a mango tree, the shade providing a slight reprieve from the 100-degree weather, a group of 25-30 women were arranged in a circle around a blackboard. Some women carried sleeping babies on their backs, while others held fidgety children in their laps, but all were focused on the woman leading the discussion. She was a Tostan facilitator and I had arrived at a Tostan Community Empowerment Program (CEP) class in the village of Samba Tacko.

Samba Tacko is a village located about four kilometers from Basse, the town where Tostan’s field office in The Gambia is located and where I have been making my home for the past two months. Tostan works in over one hundred villages in The Gambia, all located in the Upper River Region, the region furthest east in the country. Though I have visited a number of other villages during my time here, Samba Tacko always stands out in my mind. 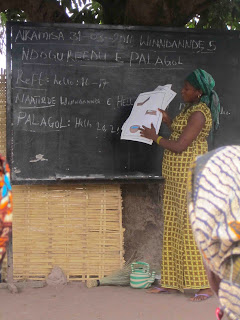 I first visited for purely social reasons. Fanta, a volunteer at the Tostan office, mentioned that her village would be hosting a program that weekend to celebrate a boy’s coming of age ceremony, and I quickly accepted her offer to attend. I arrived that Sunday afternoon dressed in my completo, a traditional Gambian outfit, not knowing what to expect. Fanta quickly took my arm and walked me around the village, where I used my limited Fula language skills to greet her mother, grandfather, friends, and other community members. We wandered back and forth between her compound, where we shared bowls of rice and looked at photographs of her friends and family, and a neighboring compound, where women were making food for the evening’s ceremony.

Due to the inland location and hot temperatures, there is little tourism in the town of Basse. Therefore, when I walk to work or wander around the market, I have become accustomed to stares or calls of “Toubab! Toubab!” (a complimentary term for “-foreigner”). It is not meant pejoratively and does not especially bother me, but in Fanta’s village, sitting among other women as we all relaxed and watched the activity around us, I appreciated the sense of calm and belonging that I had not yet experienced in The Gambia. I quickly felt at home in Samba Tacko and many hours passed before I realized it was starting to get dark and I should be on my way back to my compound.

Arriving in this village for the CEP class weeks later, I was immediately struck by this same sense of comfort. Women that I recognized warmly came to greet me, remembering my name and welcoming me back. It was especially meaningful to watch these same women actively participate in that day’s CEP class and share the new information they learned with those around them. 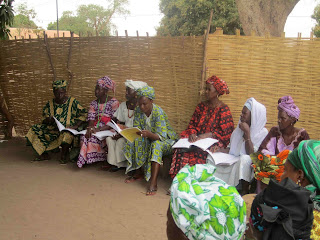 Tostan has been working in The Gambia since 2006 and has implemented its CEP in 70 Mandinka villages and 40 Fula villages. Samba Tacko, a Fula village, began the CEP in 2008 and will conclude the program in May 2011. They are currently in the Aawde II phase of the program, during which they learn reading, writing, and basic math as they revisit topics previously covered in earlier sections of the CEP, including human rights, democracy, health, and hygiene. 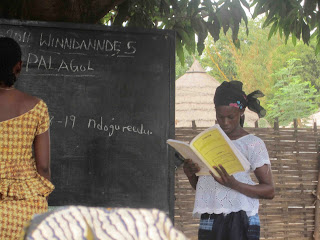 The class discussion topic for this day was prevention and treatment of diarrhea. One by one each woman demonstrated how to make oral rehydration solution for someone experiencing dehydration from diarrhea, or how to properly wash hands to prevent the spread of germs. Before participating in the CEP, many of these women did not know how to read or write, but now some women read aloud from their lesson books while others wrote on the blackboard. After each presentation, everyone in the class applauded and the women returned to their chairs, smiling with pride because of their achievements.

These women will now be able to recognize and sign their names on documents and solve basic mathematic equations, and they will be able to use these skills in micro-credit projects that are often established in villages after they conclude the CEP. I am excited for future visits to Samba Tacko, to greet these women again and see what they’re working on next.

Story by Kirby Tyrrell, Assistant to the National Coordinator at Tostan’s office in Basse, The Gambia